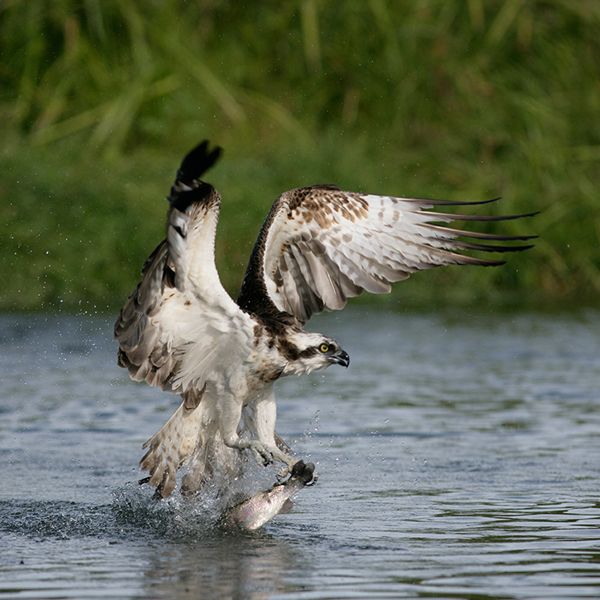 The Ospreys Are Back At Loch Of The Lowes

LM12 is better known in the local area as Laddie, and he has been the breeding male of Loch of the Lowes since 2012. He has since been joined by the resident female LF15 or Lassie, and this year will be their fifth season together. The pair have already successfully fledged ten chicks together over the years, and staff, visitors and volunteers at Loch of the Lowes will wait eagerly to see if they produce more offspring this year.

What Is Loch Of The Lowes?
Loch of the Lowes Wildlife Reserve stretches over 98 hectares in Perthshire and is home to an array of wildlife throughout the year. The highlight is the Ospreys that nest every year just 150 metres from the observation hide and live in the reserve from early April until August.

Visitors of Loch of the Lowes can also see red squirrels, Eurasian beavers, otters, pine martens and various birds. Loch of the Lowes has its own online webcams, so you can view the reserve from anywhere across the globe, but to truly experience the wildlife wonders it is best to visit in person. The visitor centre is open all year round and until 5 pm in the Summer months.

The Importance Of Ospreys At Loch Of The Lowes
In the late 19th century, Ospreys were driven to extinction in most of the UK. In Scotland, the birds managed to hang on until 1916, which is when Ospreys officially became extinct as a breeding bird in Britain. For nearly forty years Ospreys were occasionally spotted in Britain on migration, but there was no successful breeding.

A population of Ospreys remained breeding in Scandinavia, and after a large amount of support through artificial nesting platforms and legal protection, Ospreys slowly began to return to Scotland. Ospreys first appeared at Loch of the Lowes in 1969, and this was only the fifth nest known in the UK. Since then they have continued to breed successfully year after year, apart from a brief period in the mid-late 1980s.